The first full week of October equals a TNNA sponsored spinning event called Spinzilla, and this was my first year taking part. I'd heard of this madness, sure. People sitting around and pumping their legs for all they're worth, all for tallying up the yardage they've spun in that week.

I could explain the whole event, but then I wouldn't feel up to writing about my experience joining the frenzy that is Spinzilla. Please just visit the site to learn more; it won't disappoint.

A few months ago I purchased a second-hand Vespera XXL from someone on Ravelry. I practiced and practiced, feeling the process of turning fiber to yarn, and fell pretty hard in love. Having some sort of sixth sense, Ashley Eskew–dyer behind Twist Fiber Studio–invited me to join her Spinzilla team, sponsored this year by the Echoview fiber mill. After my resounding YES, I eagerly waited for the week to arrive so I could begin spinning like the wind! I even took the entire week off from work.

Brand new spinner excitement combined with lofty goals meant I needed all the time I could muster. (That and I had PTO hours to take which wouldn't roll over at the end of the year–ha!)

I started in earnest, and then life got in the way. Goals what they were, I still tried to spin as much as I could, to the point that both of my wrists suffered. Some carpal tunnel splints later, I was back in action. Check out this timelapse video of me spinning! 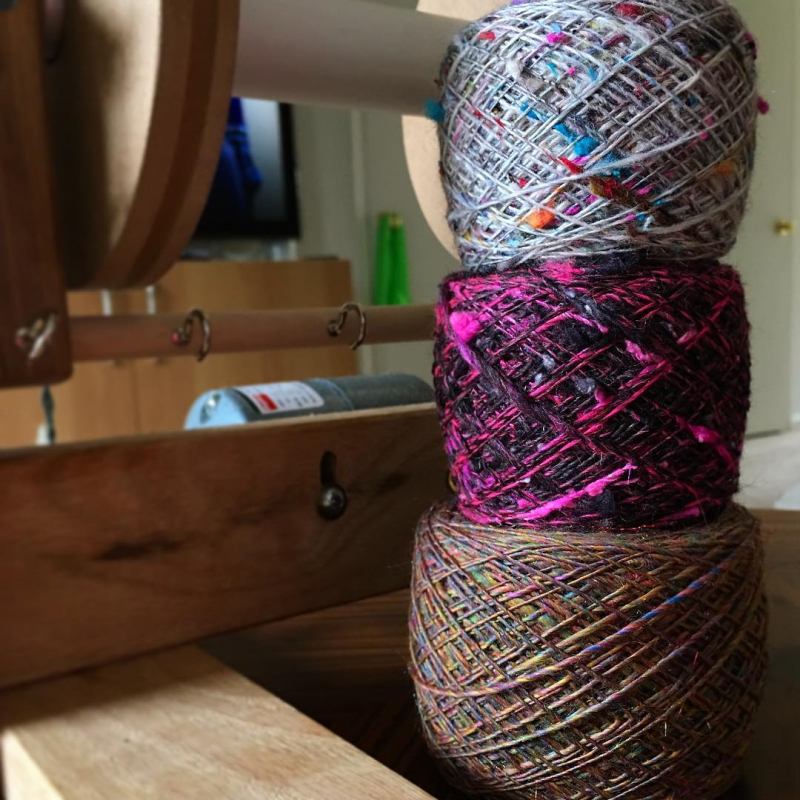 Throughout Spinzilla there are special events that some teams do. The Echoview Revolutionaries crew held several events, serving as demonstrators of spinning in some amazing locations. Sadly, living an hour away from the team location, getting out to the events proved difficult. The only event I made it to was the final one that Sunday, held at the Folk Art Center in Asheville, NC.

If you're ever in the area, take the time to stop at the Folk Art Center. It's a gorgeous location, right off the Blue Ridge Parkway, and when done you can take the parkway through some of the prettiest mountains. Head North to the Craggy Gardens for a chance to get kissed by some clouds. Cloud-kisses are the best. ( ˘ ³˘)♥

During the final event, I took another timelapse of my spinning, with an angle that showed off some of the other women in the group treadling away. Take a look below.

So amazing. Next goal is to try a treadle wheel, to see if it's something I want to later invest in or not.

Just prior to the Sunday event, I began spinning a pencil roving from Haute Knit Yarn, and had a chance to complete it just before the event was due to end. It was the most consistent spin I have completed to date, and I would have had a great fingering-weight or light sport-weight yarn if I two-plied the singles. Instead, I decided to practice chain-plying and the result of that chain ply is possibly the best complete spin so far. That's not to say any of what I spun is balanced or perfect; they're just better than their predecessors. Progress is important, and seeing progress makes me feel good about my efforts.

Here's a shot of the three skeins I completed, which shows off both the yarn and Asher. He's fantastic about getting his photo taken, so long as he's not the actual subject. 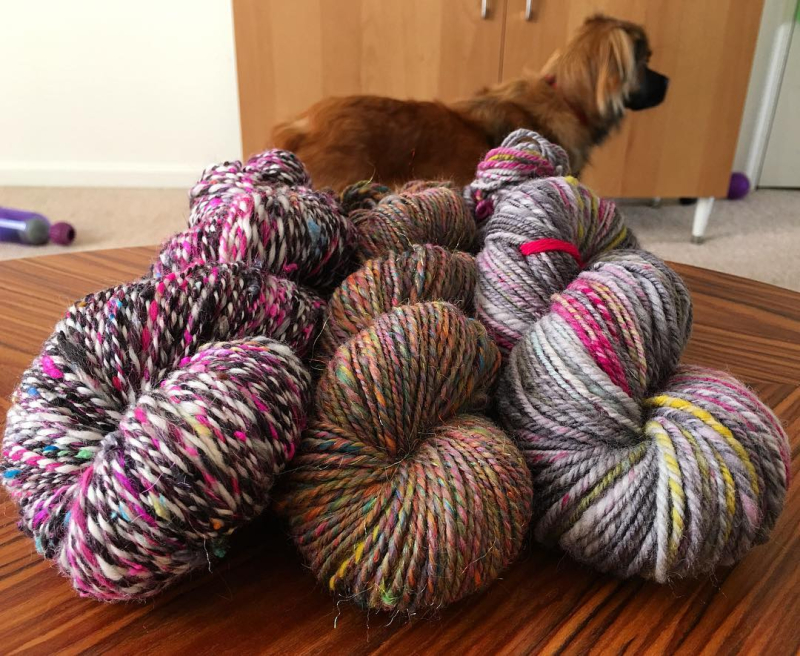 From left to right:

Total Spinzilla yardage was just over a mile, which I wasn't sure I'd reach after the week got in my way. I feel good about my results, even if my original, albeit ambitious, plans were larger than what I was able to manage. Next year, however, I plan to double the final yardage from this year.