I'm a 30-something Floridian currently living in North Carolina. My first foray into the fiber world was my learning to crochet in my mid 20s. My mother taught me the basics after my mentioning I wished I'd asked my step-grandmother to teach me when she was still with us. From there, I absorbed every tutorial I could find online and off. That led to my writing The Crochet Side blog, then later running a podcast of the same name. That was a lot of fun until I burnt myself out and needed an extended break.

After some time away, I taught myself to knit and that quickly escalated into my playing with dyeing fiber and yarn. This was my first attempt at dyeing fiber with the good ol' kool-aid method: 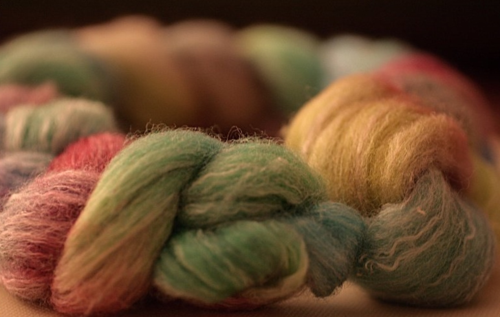 From there it was a downward spiral, and I launched The Yarn Side, playing off of the The Crochet Side name. It was fun, dyeing and sharing what I developed with others. I ran a year long yarn club called Yarnography, which was a learning experience. After some time I became...despondent. Not so much with what I was doing, but in general, and so I stepped away from everything related to yarn and fiber for a couple of years.

That stepping away felt necessary and right, just as stepping back into it now feels right. I'm not jumping in with both feet, all-in at the start. There are health issues I now have (heart failure due to an unknown infection at some point in the past, and now diabetes), so awareness of that has to play as equally important a part in my day-to-day. I previously believed that I wanted to make a sizable side business of dyeing, but I've learned to accept that I need it to be more of a hobby than any great pursuit.

Swoonish was conceived after some wordplay surrounding the fainting lady, illustrated by Edward Gorey. I needed a name that was immediately recognizable for how I wanted people to feel when confronted with my work. I want to make something that causes hearts to race and palms to sweat; something that gets people excited about color and possibilities.