A colorful crochet toy for a deserving pup 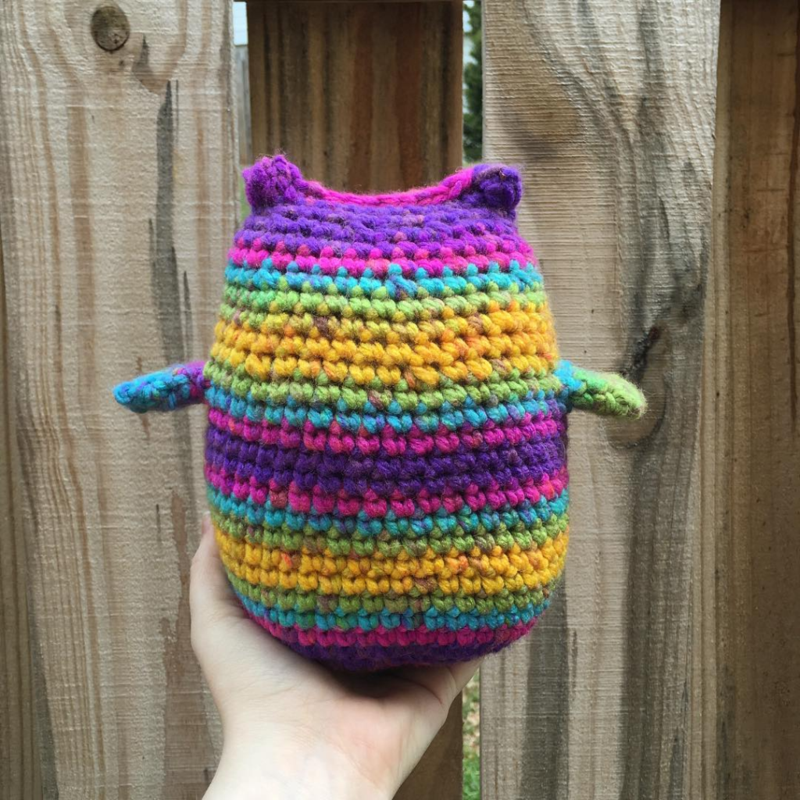 After Asher, who is now six months old, showed how mouthy he's become, destroying all store-bought toys, it became clear that I needed to crochet him a baby.

Now, I've crocheted plenty of toys for my previous dog, Rowan–some were simple tubes, others ovals, and at least one that I dubbed an 'alien'. She had her favorites, but they all lasted quite a long time; some even lasting several years. Their longevity was partly due to tight stitching, being super stuffed, and being able to easily repair holes by crocheting over them. This resulted in a frankenstein baby being born, but Rowan loved them. I'm hoping that will be the case with Asher as well. 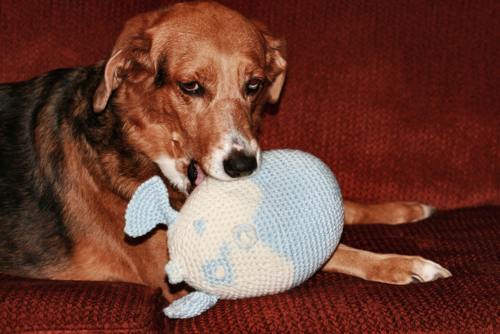 Rowan with her alien baby

There's nothing special about the toys; no pattern, no real right or wrong method. I just have simple guidelines that I always follow:

Asher rather enjoys being able to focus on little nubby bits, but also larger areas he can work his jaw on. With that in mind, I used a 5mm (US H) hook with a bulky, box-store yarn in bright colors, and single crocheted increases until I reached a size that he'd be happy to chew on. Working up the body, I made a note of where I wanted to add little wings/flaps for him to grab and shake the toy around. When I knew I was close to reaching the final height I wanted, I decreased a couple of rounds, and added the stuffing and squeaker that was pulled from an old toy. I finished the toy off by seaming the top with slip stitches, but paying attention to the corners, where I added a bobble stitch in each to create little pop-out nubby ears.

He wasn't supposed to receive the toy until after he returned home from getting neutered, but he found it the morning of while shelf surfing (you know, when they prairie dog and scan higher areas for things they're not supposed to have). He spent a little time with it before it was taken away, but he's happy to have it back now, even if he's taking every opportunity to side-eye me for the vet trip.