Hey, I'm dyeing over here (and Brianna meets a goal she set)

I participated in this year's Ravellenic Games over at Ravelry, which is a series of "events" that run alongside the Olympic games. There were hopes of knitting a cowl or fingerless gloves, but I couldn't get any knitting mojo to happen, so I chose to instead challenge myself to pick up dyeing again, using a technique that's relatively new to me.

I'm happy to share that I completed the day before the games finished, so I was able to re-skein and braid the dyed items then take a few quick shots for Instagram and sharing on Ravelry. The lighting for the "during" photos was piss poor, so they only got shared on Instagram. Here are the money shots, though... 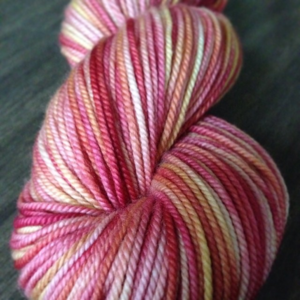 Sakura - an MCN blend in pinks and yellows Hanami - a merino lace in more of a pinky-orange tone

I also dyed two ounces of a 50/50 blend of merino and tencel, but the light outside had grown considerably darker as I tried to line the shots up just right, so that'll wait for another day. Who knows, maybe I'll use an actual camera and not my phone to take the photos next time.

The dye process I tried is a series of over-dyeing that takes patience. I guess it's referred to as glazing, whereby you layer color upon color. Depending on the fiber, how you pre-treat it, and what you put in the bath water, the result will differ.  This particular set was simply allowing the skeins to soak in water for 20-30 minutes, giving them a squeeze to wring them out a bit, then adding one color at a time, letting each color exhaust before taking the skeins out and adding a new color. I also played with adding loose knots or twists to add some color resistance in some areas.

The difference between these two skeins, even though they were dyed in the same pot, is that after I was done with the merino/cashmere/nylon (MCN) blend, I added more of my gold tone and let the lace soak in it for a bit longer. I really wanted to see how far one additional step could take the yarn when that step used one of the same colors in the previous baths. It really calmed down the range of pinks and made the yarn more tonal; definitely has more of a pinky-orange vibe going on.

The merino/tencel fiber I dyed in the pot alongside everything else. I'll write up more about that at a later point perhaps, but its coloring looks more like the lace skein than the MCN (which is a fingering/sock weight). The only difference is that the merino in the spinning fiber has the pink and orange blend, but because the tencel doesn't take color it's seen as streaks of a silvery white throughout. It's so gorgeous but difficult to photograph. Definitely need to use the Canon to properly capture how amazing it looks.