If you don't follow my Instagram, you'll have missed a recent project I completed with Malabrigo Rios in Plomo. It's probably my favorite go-to color, but for this particular project it was a perfect shade of gray with some purple undertones. 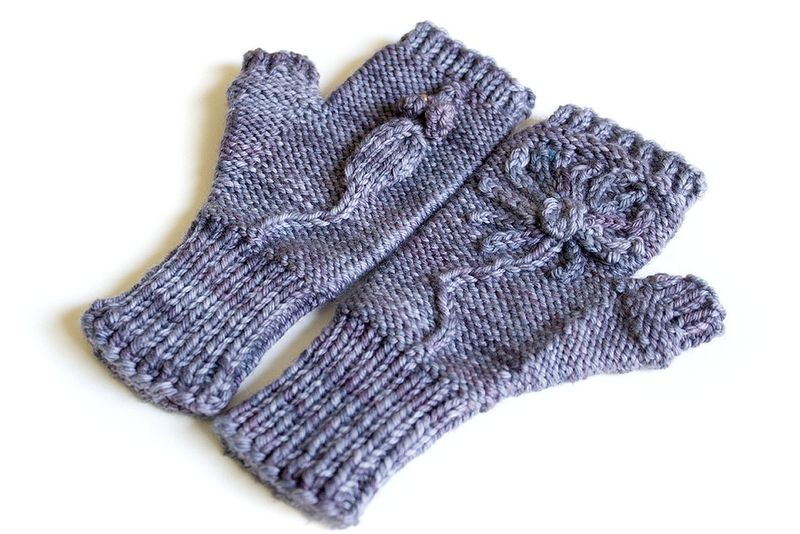 These are my NezuShi mitts that I knit for a friend of mine. We share a love for the No. 6 anime, and the two protagonists are represented in these mitts: the one shown on the left represents Nezumi, whose name in Japanese means "rat"; and the one shown on the right represents Shion, who was named after the aster flower. The color itself is totally Nezumi and reminds me of the wrap that Nezumi wears.

There are some minor things I don't love (namely the fact that I carried the yarn for the thumb, but it makes it look bulky there; silly mistake), but I'm 100% in love with the pair. I super hope my friend enjoys wearing them when they finally get together. I have no idea how long First-Class International to Japan takes. A few weeks, maybe?

I was having the hardest time with the pattern as-written, since it was riddled with errors. With that, I took the basics of the 75 yard Malabrigo Fingerless Mitts and, with some help to decode the mouse part, I married the two pieces together, then created the aster myself. Excuse me while I pat myself on the back just the tiniest bit.

After I finished those, my mother asked me if I would knit her another hat. The first hat was knit out of handspun (handspun for me, using my Superwash Merino and Cashmere blend), and was just a basic ribbed cuff hat to keep her head warm while she goes through chemotherapy. The chemo has caused some forgetfulness and issues with focus, so she's misplaced the hat.

To help keep her head warm in what's left of our Florida Winter, I'm using what's left of the handspun and more of the Plomo. The pattern this time is the 1898 hat, offered by the Seamen's Church Institute. The band and earflaps are knit lengthwise, then folded in half for extra cushy warmth. The edge stitches, from folding the two sides together, are then picked up to knit in the round for the rest of the hat. I'll be knitting the band in the Plomo, then using the remaining handspun for the body.

I'm allllmost done with the band. It's taken longer than I expected, but it feels amazing. I love you, Rios! 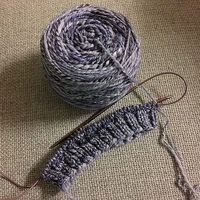 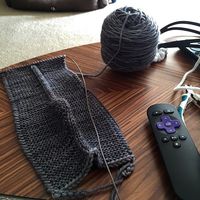 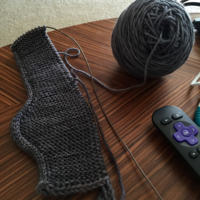 I was clearly watching some Roku goodness (probably Bob's Burgers or Archer) while I took the last two shots, but that's the progress of the band from a day or two ago. The photo on the left is a progress shot from the first hat, just to show the color it'll be paired with.

Currently, I've completed the other earflap and am working on the last remaining few inches before I seam the two short edges together. After that I'll be picking up the stitches on the long, flat side. Exciting! Squishy! Just hope to have it completed this week so that I can begin work on a hat for a cousin who is also going through chemotherapy and radiation. My poor girls.