Bundles of Joy: Little Fiber Samples (but before that: chatter!)

I began writing a post the other day, all about a business aspect that I was dealing with, but when sitting down this fine Sunday to finish writing, I blanked. My mind was empty, all thoughts about that topic (branding) I may have had at one point had left me. That's fine, that's fine. I'm hopeful it'll all come back to me. (Please come back to me.)

As I sit here now, taking occasional peeks of the sun beginning its journey down, I'm feeling very in-the-moment and peaceful. (And also sleepy, but that's pretty much every day.) In the air there is a drift of music from Caryn's side of the house, lots of lively bird chatter filtering in from outside since it's a nice enough day here in Florida for the windows to be open, and then the occasional shout from me for the blasted birds to get off the drying rack setup outside. (Fairly certain they just want to steal the yarn and fiber hanging outside for their nests. Such opportunistic little things, but ooooh babies soon!)

While relaxing and enjoying this bit of Sunday, before I force myself to get up and do something productive or good for me, I've been thinking about color. Is that weird? Of course not. Never. Never ever. Color is all. And lately I've been playing in it until my poor fingers were pruny. Well, that's the water the color is being put in, but all the same–pruny. Then dry. Gross. Just something dyers have to deal with, and deal with it we do.

The colors, though. Oh man. There are proper photos to take yet, but let me say that I've been playing with creating repeatable colorways, down to strengths and values and weight of goods. Much of that was inspired by Bee Mice Elf, which I wrote about in a prior post. It felt really good in a way I hadn't experienced before.

I always sort of haphazardly dyed things. No, 'haphazardly' sounds like I was willy-nilly-ing it without any care. It's more that I went by feel. I chose colors and color combinations based on how I felt they would look together, added this and added that, all from the dried state of the dye. It was never about taking notes, thinking ahead, making sure it was something I could recreate. I wasn't going to let methodical dyeing practices weigh me down and burn me out. I was a feeler, dyeing on emotion and intuition, feeding off the results like we had a bizarre symbiotic relationship (well...). For me to move forward, rebuild my customer base to what it was in the past, then beyond that, I need to be able to involve some practicality while still allowing myself to indulge in a bit of color Bohemianism.

Indulging is exactly what it feels like, too, I've learned. In mixing up dye stock solutions, I'm still allowing myself the freedom to mix and play and discover. Only now I'll be paying more attention to taking notes when I mix and apply the dye. Then when I hit upon something I think is really amazing, I can respond in the positive when asked if I can reproduce the colorway. Light bulbs all around my head!

Copious notes were taken last night as I spent several hours in the dye pots, both blending colors and testing potential new bases. I was hoping everything would be dry before the daylight faded too much to take photos with my Canon. As the nice and peaceful feeling had hit me before the sun began to set in earnest, I've only now realized that I spent all this time writing and being lazy when I could have been checking yarn and taking photos. Whoops! Something to look forward to another time.

To try and make up for that bobble on my part, I'll share a photo of some little fiber bundles I dyed up with the last bit of combed top in a 75/25 blend of Superwash Merino and Nylon. 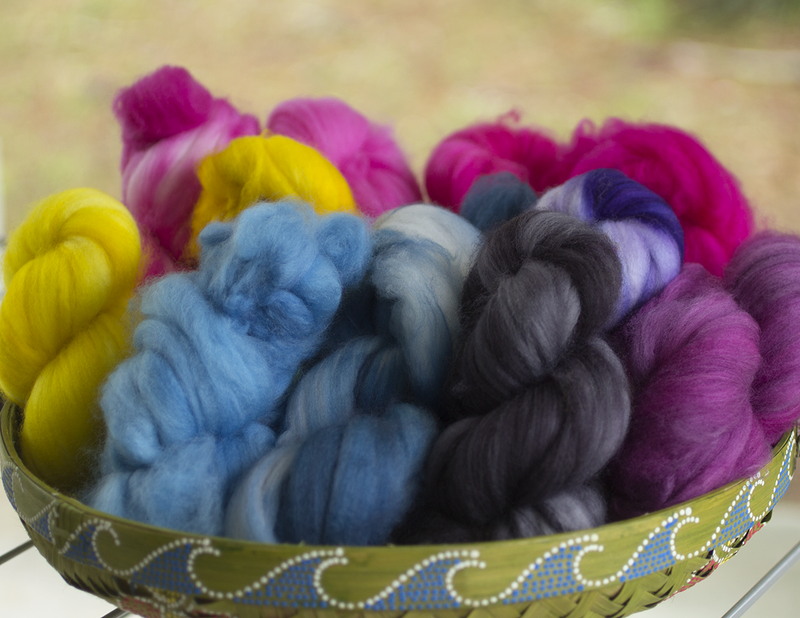 Gosh, that charcoal is really pretty. I may be feeling a bit of compulsion to repeat that on some yarn.

I decided to try putting my own methods of dyeing to the side, and following Bee Mice Elf's steps that she lays out in her color mix series. A lot of the info and color blending worked really well for me. The only thing that didn't, I have to admit, is the addition of the acid to the dye bath before the fiber is added. It causes the dye to strike too fast, so there's a lack of even coverage. You can see that in the photo I share below, where some are obviously uneven and the dye didn't strike nearly as deeply in areas. It wasn't until I went with what I know to work best for me that I saw more even coverage.

Maybe I'll write about that some in a later post (or talk about it, since I've been tossing around the idea to start another podcast). Until then...